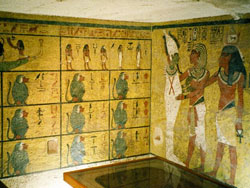 This Pharaoh’s tomb became the source of legend, the source of the curse of Pharaoh. His final resting place was discovered by Howard Carter in 1922. The reasons making it famous was the simple fact that it had not been disturbed for 1700 years. As a Pharaoh, Tut Ankh Amon was lost in history. His short reign of 10 years was far from enough to leave a grain of sand in the great history of ancient Egypt. But the finds in his tomb was the stuff for legends. This is also known by the Department of Antiquities. Visiting his tomb will cost you an extra EGP 20.00 on