The points of interest in Luxor are normally divided between the Westbank and the Eastbank of the river Nile.

Also, don’t under estimate what can be visited during a day excursion leaving from Luxor. We can even go as far as Aswan, but I wouldn’t really recommend doing this. It is a long drive and you will spend most of the time in the car driving. But still, it can be done if you really want it.

Hereunder is a list with the attractions in close proximity to Luxor and a brief explanation what you can expect.

This Pharaoh’s tomb became the source of legend, the source of the curse of Pharaoh. His final resting place was discovered by Howard Carter in 1922. The reasons making it famous was the simple fact that it had not been disturbed for 1700 years. As a Pharaoh, Tut Ankh Amon was lost in history. His short reign of 10 years was far from enough to leave a grain of sand in the great history of ancient Egypt. But the finds in his tomb was the stuff for legends. This is also known by the Department of Antiquities. Visiting his tomb will cost you an extra EGP 20.00 on

Hatshepsut is regarded as one of the most successful Pharaohs. This temple was built in her honour and to serve as her funerary temple. There is a theory suggesting that the temple as we know it now was used as a Coptic Monastery in the early Christian period. The building also reflects the conflict between Hatshepsut and her nephew/son in law Tuthmosis III. After her mysterious death, some of her images and cartouches were damaged by his followers.

The House of Carter

Howard Carter found his place in history as being the archaeologist discovering the legendary tomb of Tut Ankh Amon. The house where he lived and directed his excavations from has recently been bought by the authorities and painstakingly restored to its original state with the genuine furniture. The highlight of this little museum is a holographic display in which an actor re-enacts Howard Carter talking about the events leading to his fabulous discovery.

Ramses II ruled for 67 years during the 13th century BC. He was the mightiest of all pharaohs. During his reign, Ancient Egypt reached its apogee of power and glory.  This extraordinarily long reign, the wealth available in the state coffers, and, undeniably, the pharaoh’s personal vanity meant that Ramses, of all the ancient rulers, left what is perhaps the most indelible mark on the country. His legacy can be seen most clearly in the archaeological record – in the many buildings that Ramses modified, usurped, or constructed from the ground up. Most splendid of these, in accordance with New Kingdom Royal burial practices, was his memorial temple, the Ramesseum – a place of worship dedicated to the pharaoh, god on earth, where his memory would have been kept alive after his passing from this world. Unlike the massive stone temples at Abu Simbel, the inexorable passage of three millennia was not kind to his “temple of a million years” at Thebes. This was mostly due to its location on the very edge of the Nile floodplain, with the annual inundation gradually undermining the foundations of this temple, and its neighbours The Ramesseum is rarely part of the off the shelf excursions organised by tour operators. Therefore it is very peaceful and not overrun by the tourist hordes. It also very often radiates a mystic power on to most of its visitors.

The Temple of Karnak

The Temple of Karnak stands about 3 km to the North of Luxor. The archaeological site of Karnak is a conglomeration of temples, pylons, chapels and other buildings. So there is not just one temple but a multitude forming one of the largest temple complexes in the world. One of the most impressive parts of the site is the Hypostyle Hall built by 134 massive columns and covering almost 5000 sq metres

The Temple of Abydos

For nearly 5000 years, Abydos remained a central religious site to Egypt, remaining important to the religion’s understanding of death. The oldest recorded temple at Abydos was devoted to the canine god, Osiris-Khentimentiu. Today, two temples remain in fine shape. Especially, the Temple of Seti I is impressive, unusual with its L-shape and noted for its smooth and discrete appearance in front, its impressively dark and beautiful chambers, most keeping their roofs

The temple of Horus at Edfu is the second largest next to Karnak and one of the best-preserved. It was built during the Ptolemaic era between 237 and 57 BC. The inscriptions on its walls provide important information on language, myth and religion during the Greco-Roman period in ancient Egypt. In particular, the Temple’s inscribed building texts provide details of its construction. There are also important scenes and inscriptions of the Sacred Drama which related the age-old conflict between Horus and Seth.

Valley of The Kings

The Valley of the Kings is one of the largest necropolis’ in the world. It used to be a treasure cove filled with the riches of Pharaohs who chose this place as their final step to the other world. All of the tombs which were discovered are now emptied. Perhaps some lie undiscovered under the desert sand. This is the field of archaeologists still fine combing the area. You pay a basic ticket which gives you access to three tombs which allows you to choose from a total offer of more than 120 chambers

She was one of the most legendary Queens of Egypt, Nefertari was praised for her exceptional beauty. Even to that level that Ramses II build her a temple of her own next to his own at Abu Simbel. Her tomb in the Valley of the Queens on the Westbank is also an exceptional masterpiece. The tomb, if accessible; is allowed for up to a maximum of 10 persons at a time. You are allowed to stay no longer than 15 minutes in the Tomb. And you do pay a hefty supplement on top of the general admission to the Valley of the Queens. Photography in the tomb is strictly forbidden.

Medinet Habu is the name commonly given to the mortuary temple of Ramses III. It is an important New Kingdom structure on the Westbank of Luxor. Aside from its intrinsic size and architectural and artistic importance, the temple is probably best known as the source of inscribed reliefs depicting the advent and defeat of the Sea Peoples during the reign of Ramses III.

Deir el-Medina is a small settlement 2 km west of the Nile. Believe me, it is little known in the traditional tourism rat race which takes place daily on the Westbank, but it is one of the most phenomenal archaeological sites of ancient Thebes. It was home to the workers of the royal necropolis and might be viewed as a microcosm of life in Ancient Egypt even although the workers were at the ‘top’ of their profession. The ancient name of the site was Set Maat, ‘the Place of Truth’ and the workmen were ‘servants’ in the Place of Truth. The community seems to have been established near the beginning of the 18th Dynasty, at least by the reign of Tuthmosis I (whose name has been found on bricks in the walls surrounding the village) or perhaps a few years earlier – since the villagers through many generations held Amenhotep I, and his mother Queen Ahmose Nefertari, in high esteem (maybe as patrons). From research, over the last century, we know much about these people, how they lived and where they were buried and what they owned. Many finds were removed in the free-for-all of previous centuries and pieces are found in nearly every major museum around the world. It is ironic that more is known about the workmen who cut the New Kingdom tombs than we do about the kings who commissioned them. In their spare time, they build their own dwelling for the afterlife. Two are available to visit. It is a bit of a tricky descent and it’s rather claustrophobic down there but it really worths the little adventure. The decorations are amongst the most beautiful in Egypt. 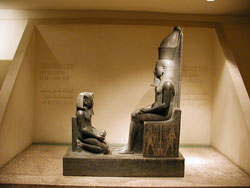 Luxor Museum was inaugurated in 1975. It prides itself on a very exclusive collection dating from the Theban period. Of course, it can’t beat the artefacts displayed at the Museum of Antiquities in Cairo. But it has some very interesting pieces on display. Worthwhile visiting whenever you are interested in Egyptian history. The famous storyteller Wilbur Smith made a reference to it in his novel “The Seventh Scroll’ which was, of course, totally fictitious being part of his style of “continuation of disbelief.

The unique double temple of Sobek (crocodile) and Haroeris (falcon) in Kom Ombo dates from about 180 BC during the Ptolemaic era; Additions were made into Roman times. It was not only a sanctuary to both deities but also some kind of a health centre. Following hieroglyphs in the complex some, for those days, very complex surgery was performed by the attending Priests.

The main temple has an imposing facade constructed as a low screen wall divided by 6 massive Hathor-headed columns and a huge curved cornice with a winged sun-disc over the entrance. The ceiling of the first hypostyle hall is of particular interest, divided into seven bands of well preserved astronomical figures featuring the goddess Nut, vultures and winged sun-discs and the Roman signs of the zodiac. It is also one of the very few places in Egypt where reference is found relating to the legendary Cleopatra