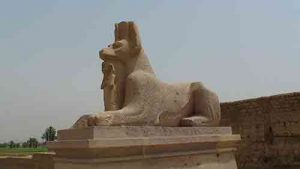 Ramses II ruled for 67 years during the 13th century BC. He was the mightiest of all pharaohs. During his reign, Ancient Egypt reached its apogee of power and glory.  This extraordinarily long reign, the wealth available in the state coffers, and, undeniably, the pharaoh’s personal vanity meant that Ramses, of all the ancient rulers, left what is perhaps the most indelible mark on the country. His legacy can be seen most clearly in the archaeological record – in the many buildings that Ramses modified, usurped, or constructed from the ground up. Most splendid of these, in accordance with New Kingdom Royal burial practices, was his memorial temple, the Ramesseum – a place of worship dedicated to the pharaoh, god on earth, where his memory would have been kept alive after his passing from this world. Unlike the massive stone temples at Abu Simbel, the inexorable passage of three millennia was not kind to his “temple of a million years” at Thebes. This was mostly due to its location on the very edge of the Nile floodplain, with the annual inundation gradually undermining the foundations of this temple, and its neighbours The Ramesseum is rarely part of the off the shelf excursions organised by tour operators. Therefore it is very peaceful and not overrun by the tourist hordes. It also very often radiates a mystic power on to most of its visitors.