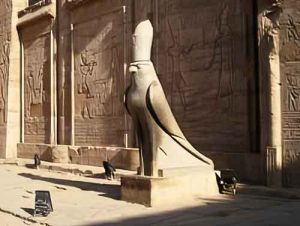 The temple of Horus at Edfu is the second largest next to Karnak and one of the best-preserved. It was built during the Ptolemaic era between 237 and 57 BC. The inscriptions on its walls provide important information on language, myth and religion during the Greco-Roman period in ancient Egypt. In particular, the Temple’s inscribed building texts provide details of its construction. There are also important scenes and inscriptions of the Sacred Drama which related the age-old conflict between Horus and Set